Posted at 14:14h in Uncategorized by Alicia Barrientos 0 Comments
Share 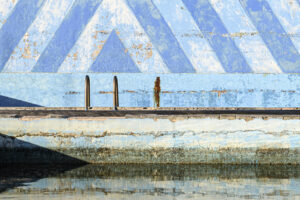 From July 8 until September 11, 2020 (closed during August) the project Pools of oblivion, made in 2019 and produced in big format photographs, will be shown in Galería Juan Manuel Lumbreras, Bilbao. Selected for the Festival Off of PHotoEspaña 2020, its photos can be seen in the festival’s online gallery.

These swimming pools are located in a Havana neighbourhood. Their state of dereliction is staggering. Most of them have been victims of nature’s actions. Mainly, from the attacks of the sea which they are adjoining. It’s difficult to fathom why they were built there and in that way, leaving them vulnerable to such a formidable and unrelenting enemy.

Then many things came to pass. And the pools fell into oblivion as society did not care and could not afford to repair and maintain them.

Their remains embody that future which was to be and did not take place. They mirror so many promises never fulfilled. And they are also a reminder of so many realities and projects which were killed or let die.

This site uses Akismet to reduce spam. Learn how your comment data is processed.